110GB+ worth of photos/videos on a microSD memory card #1

August 15, 2013
We have a family NAS where we keep all kinds of stuff. Well, actually it's an old laptop that functions as a server, with 3 x 3TB external USB HDDs attached. I run all the standard mirroring and backup on the laptop, and one of the HDD is shared over the network for everyone to dump their stuff into.

Like most family these days, we take photos and videos on a number of different devices. The smart phones, digital camera, DSLR etc. Even the kids have their own cheap digital compacts. And the devices have evolved over the years. The photos have mostly stayed JPEG, with the resolution increasing steadily. The videos, however, are a different story. Starting from the V8 (which we converted to XVID AVIs) to a Sony (which produced MPEG-1 files) to a Casio (which gave us H264/MOV files) to the current-gen Sony (MTS format), there's an incredible number of video formats we have to deal with. On top of that, we do scans of old photos and slides, the kids' artwork etc. These are all dumped into the family NAS.

To avoid being locked into a particular platform, we resisted moving to any software that relies on an underlying database for organizing the photos. Instead we created folders (2010, 2011, 2012 etc) and subfolders (eg. 20100825 Adam's Birthday Party) within the underlying filesystem to organize the photos. With the subfolders, the photos and videos are renamed to "YYYYMMDD-hhmmss" format. jhead is a great help batch-renaming of photos. For video files, the strategy varies. And not all filles can be renamed this way (eg. the scanned photos). Though crude, this has mostly worked. It is also quite flexible when it comes to backup and batch processing.

For viewing the photos, we use XnView. 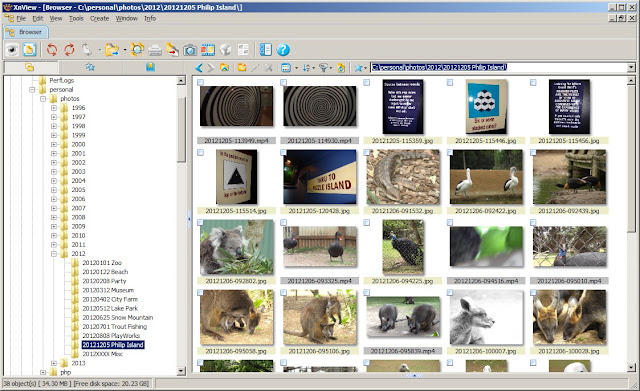 IrfanView works as well, but it requires more tinkering to get it working with the different video file formats that we have. XnView works pretty much out of the box with the video files. 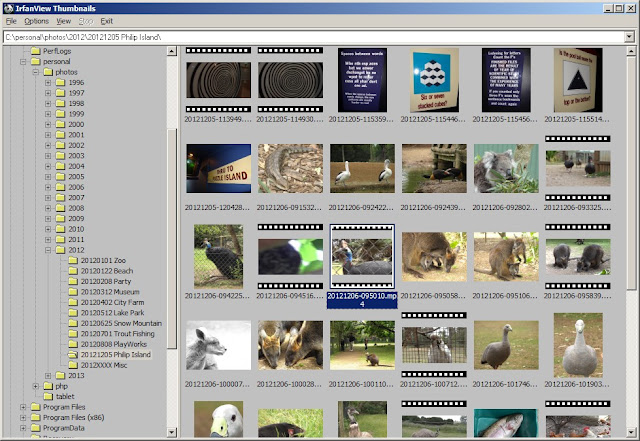 These two apps have a number of advantages going for them:

1. They are both freeware with lots of plugin support.

2. They work at the filesystem level, and we can easily expand/collapse the folders/subfolders to view our media archive. Some apps require you to import the media that you want to view.

3. They display both photos and videos, both at the thumbnail and individual media level. Most media viewing apps support only photos.

4. They are portable, meaning they can be easily copied/moved from machine to machine without re-installation and executed with their settings intact.

The downside is that both apps are not particularly sexy, but they do get the work done quickly and effectively.

One problem I face is that the photo/video archive on the NAS is standing at 110GB and growing steadily. I want to be able to view this archive on my Android tablet, which is a very natural medium for perusing all the photos and videos that we have accumulated. But fitting 110GB of files into the tablet is next to impossible currently (the largest microSD card is 64GB), and even if I could, the tablet won't be able to deal with all the video formats in the archive (the 1080p MTS files are particularly problematic).

So I decided to write a script to transcode all the files in the archive to a smaller size to see how much I can squeeze it down without ruining the viewing experience on the tablet. This will be the topic of my next post.