Previously, I added a USB cooling fan to the X96 Air TV box. The problem with this mod is that the fan is always running, and it runs at full speed. Ideally, the fan should kick in only when the CPU temperature is above a certain threshold. It would be even better if there is a way to control the fan speed.

Dan McDonald left me a comment pointing to his project on Github. He basically connected the fan to a USB relay that can be controlled by Python script. His project inspired me to make a similar mod that would make use of the spare D1 Mini boards I have lying around.

The plan is to hook up the fan to a MOSFET (2N7000) and control it via PWM. Here's the very simple circuit: 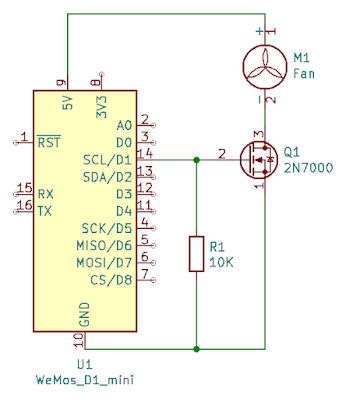 The code simply reads a single character from the serial port (0 - 9). 0 will turn the fan off, while 1 - 9 will generate a proportional PWM to drive the fan, with 1 being the lowest and 9 being the highest.
Here's the Arduino code:
The code was verified to work correctly with a breadboard circuit and the serial monitor.
Here's the prototype board that I put together in a hurry: 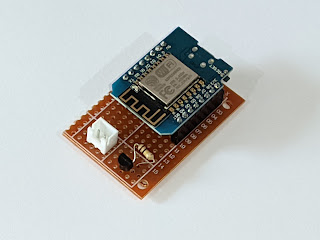 I re-used the same fan, but connected a 2-pin JST header to it instead. 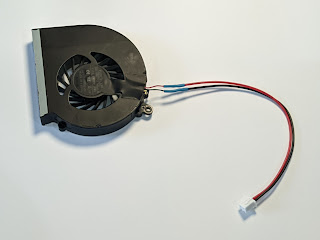 Here it is sitting under the X96 Air: 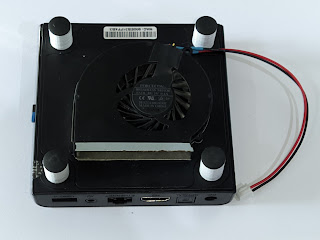 Printed a 3D casing for the prototype board: 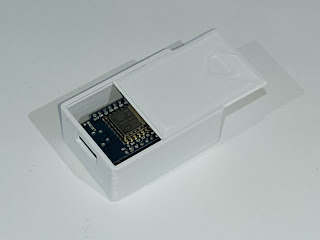 This is with everything hooked up: 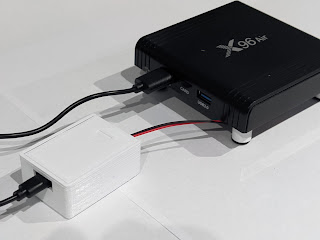 I did hit a little snufu when I tried to get it working on the X96 Air box itself. The D1 Mini uses the CH340 USB-to-serial module, which I had problems getting to work on the box (CoreELEC 19.4). The D1 Mini was receiving gibberish from the box, and I spent many hours trying to fix it. Eventually I concluded it was the CH340 driver included with this kernel, because it had zero problems working with the CP210X.
I had 2 options: recompile the kernel with an updated CH340 driver, or find a board that uses the CP210X. Luckily, I have a D1 Mini Pro lying around that uses the CP2104, and it was pin-compatible with the D1 Mini. So I simply did a board swap, and everything suddenly worked smoothly!
List all the USB devices connected to the X96 Air:
Unfortunately, setserial does not work to configure the USB-serial port:
We need to install stty, but to do that, we need to install Entware support:

After reboot, we can install the stty package:

Then I created a shell script in the /storage folder called cpufan.sh:

Remember to make the script executable by using:

Finally, I run the script every minute by adding it to crontab:

This command is very helpful to check if the script is being run by cron, and whether there are any execution errors:

This command is useful for stressing the CPU quickly and raising its temperature:

June 20, 2020
This hack is inspired by this post . A year ago, I bought an adapter cable for my wife's Thinkpad X1 Carbon (2nd Gen) that allows her to power her laptop with a 60W-capable portable battery (20V x 3A). A USB-C cable goes from the battery into the adapter, which converts it to the slim tip output required by the laptop. Everything works out of the box, so I didn't give much thought about it. Recently, I decided to buy a similar cable for my Thinkpad T450s. I know technically it should work because the T450s can go as low as 45W (20V x 2.25A) in terms of charging (though I have the 65W charger - 20V x 3.25A).  I went with another adapter cable because it was cheaper and also I prefer the single cable design. So imagine my surprise when the cable came and I plugged it into my laptop and it didn't work! The power manager just cycle in and out of charging mode before giving up with an error message saying there is not enough power. After much research and reading the Thinkwiki
Post a Comment
Read more

December 02, 2012
I used to use AppBrain/Fast Web Install to keep track of which apps I have installed on my phone, and to make it easier to reinstall those apps when the phone gets wiped or replaced. But AppBrain had been going down the tubes, and Fast Web Install had always been a hit-and-miss affair. Android's own "backup to the cloud" system had previously been even more unusable. There isn't a place where you can see what has been backed up. And when you setup a new phone with your Google account, you just have to wait and pray that your favorite apps will be restored to the phone. Typically all the stars have to be aligned just right for this to happen. More often than not, after waiting for an hour or so and nothing happens, you just curse under your breath and proceed to install your favorites apps manually via the Play Store. But I just looked again recently and was pleasantly surprised that things are much more civilized now. Firstly there is a place now where you can loo
Post a Comment
Read more