This is the latest, and probably final iteration of my ESPCLOCK project. You can find ESPCLOCK1 here, and ESPCLOCK2 here.

The project finally made the leap from breadboard to PCB. I tried using a prototype board, but the circuit has just enough connections to make the endeavour difficult and messy, so a simple PCB was designed using KiCAD. 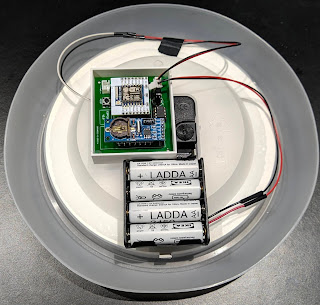 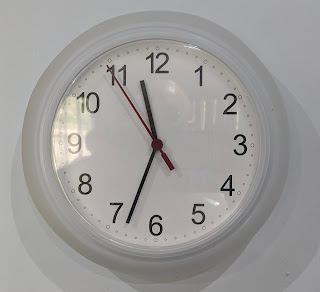 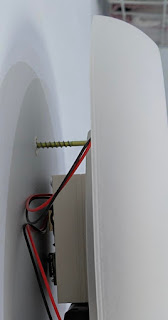 A simple housing was printed for the PCB. The housing and battery holder are hot-glued to the back of the clock, leaving the clock dial and mounting hole exposed. The clock can be hung to the wall as designed, but with a long mounting screw. As you can see from the photo, there is a gap between the clock and the wall due to the extra gear, but from the front, it actually looks quite normal.

I am currently running a long term test on the working prototype so that I can check whether the numbers work out, or I have made a mistake somewhere in my calculations.

The Arduino source files and KiCAD design files can be found on Github.

Compared to ESPCLOCK2, there haven't been much change to the ESP8266 side of the code. Its main role continues to be running a web server (via WifiManager) to assist in setup. Once setup is done, it checks the actual time via the Internet every 2 hours, and sends that information via I2C to the ATtiny85.

The hardware setup for the ESP-07 is pretty basic: 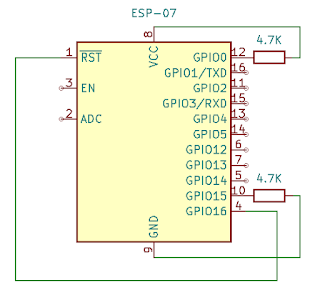 The Arduino setup for the ESP-07 is as follows: 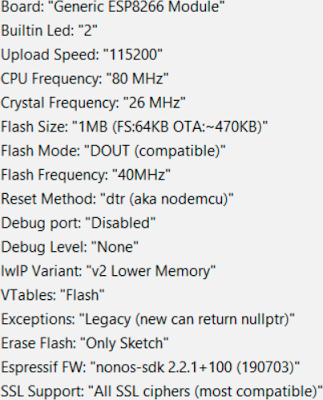 The only thing extra is to program the PCF8653 RTC to generate a 1HZ clock signal in setup(). The library used is:

Besides hooking the RST pin to GPIO16 so that the ESP-07 can wake up from deep sleep, the RST pin is also hooked up to this reset circuitry: 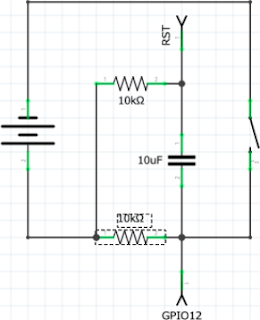 I got the idea for the reset circuitry from here. 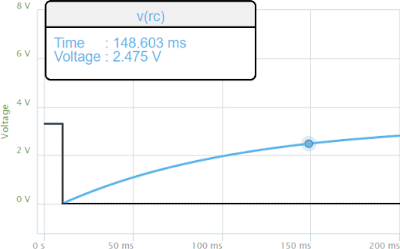 However, GPIO12 stays LOW as long as the pushbutton is held down. This means on startup, setup() can read its state and determine whether to perform a factory reset (i.e. bring up the built-in hotspot/web server for configuration). 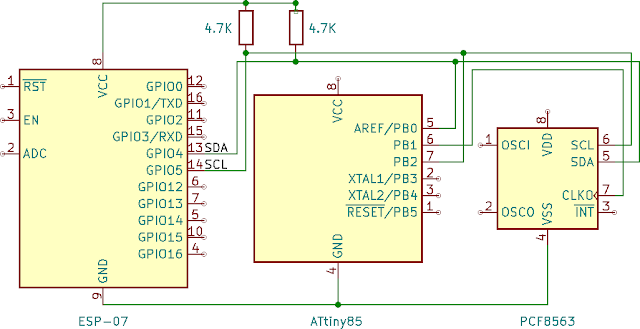 The 1Hz clock outputs to PB1 of the ATtiny85, which wakes the latter from POWER_DOWN sleep every 1 second to tick the analog clock (well technically it wakes the latter twice a second since the ATtiny85 can only be configured for a pin-change interrupt; you cannot tell it to respond only to a rising or falling edge on the pin; so at the start of the ISR, we read the pin state and only respond if it is LOW).

The code on the ATtiny85 is actually much simplified on the new design. Previously, a lot of code is utilized in running and tuning Timer1 dynamically to provide an accurate 1Hz clock. All that is now removed. A simple pin-change ISR is used to respond to the clock signal from the PCF8563.

Everything else remains the same. There's the I2C code to respond to commands from the ESP8266 to set/run the clock. The code to detect low power via built-in ADC and save the clock state to EEPROM is also there.

The ATtiny85 code is compiled using the following board config: 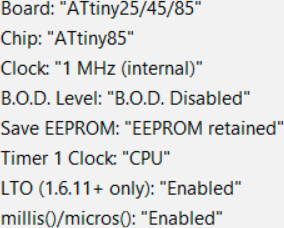 I found a possible solution here, which is to use 4 small signal diodes (1N4148) to function as a voltage clamp in both directions. 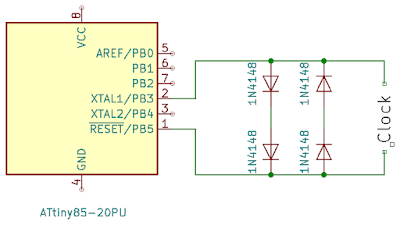 Since the drop across each diode is ~0.6V, the drop across 2 diodes in one direction is ~1.2V. This turned out to work remarkably well. The pulse width could be pushed to the ~30ms range (ended up using 40ms in the code for some allowance), and there were no missed ticks. The setup is stressed tested using some code that makes the clock fast forward for 60s, stop, then repeat. With this test, it was easy to verify that there were no missed ticks even after running the test for many hours (because you can check that the second hand always stop at the same spot after every minute).

As mentioned at the start, this is probably my final iteration of the ESPCLOCK project because I have exhausted all ideas for additional power reduction.

The current design allows for at least 4 months of runtime from 4 x 1.2V AA NiMH rechargeables. Using eg. 4 x 18650 cells connected in series would increase the runtime even more. For example, 4 x 2000mAH cells should yield about 9 months of runtime. I decided to use the NiMH rechargeables for testing because these are cheap and readily available.

If I have time, I will also look into adapting the circuit/code to work with "smooth" clocks (the second hand doesn't tick-tock but runs smoothly and continuously) and figure out the power draw for that.
ESPCLOCK1 / ESPCLOCK2 / ESPCLOCK3 / ESPCLOCK4