June 20, 2020
This hack is inspired by this post.
A year ago, I bought an adapter cable for my wife's Thinkpad X1 Carbon (2nd Gen) that allows her to power her laptop with a 60W-capable portable battery (20V x 3A). A USB-C cable goes from the battery into the adapter, which converts it to the slim tip output required by the laptop. Everything works out of the box, so I didn't give much thought about it. 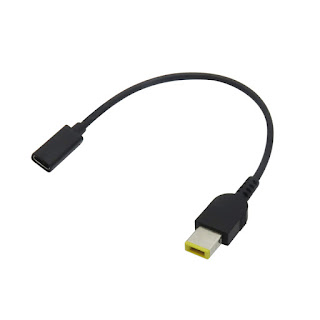 Recently, I decided to buy a similar cable for my Thinkpad T450s. I know technically it should work because the T450s can go as low as 45W (20V x 2.25A) in terms of charging (though I have the 65W charger - 20V x 3.25A).  I went with another adapter cable because it was cheaper and also I prefer the single cable design. 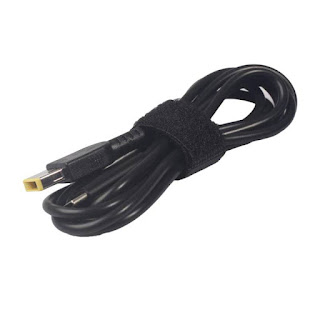 So imagine my surprise when the cable came and I plugged it into my laptop and it didn't work! The power manager just cycle in and out of charging mode before giving up with an error message saying there is not enough power.
After much research and reading the Thinkwiki Power Connector page, I finally realized what was going on. The middle pin in the slim tip connector is hooked to ground via a tiny resistor. The value of the resistor tells the charging circuit what current to draw. If it's 120Ω, it will draw 2.25A (45W). If it's 280Ω, it will draw 3.25A (65W). If it's 550Ω, it will draw 4.5A (90W). So obviously the connector in the cable I received is the 550Ω/90W type. So it makes my T450s try to draw 4.5A for charging, which far exceeds the 3A that the battery is able to provide. So the battery drops voltage, which terminates the charging cycle.
(It also means my wife's cable has the 65W connector, which is out-of-spec, since the listing says it supports up to 90W. But turns out to be a blessing in disguise, so my wife was able to charge her laptop with a 60W battery out of the box).
So now I have 3 options:
1. Buy a new portable battery that can supply 90W (87W, or 20V x 4.35A will probably work). 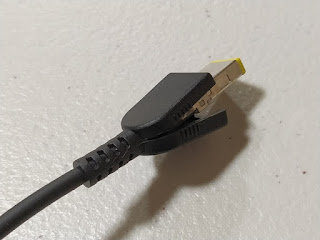 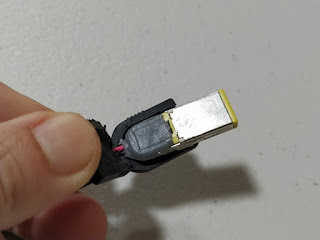 The resistor is encased in some kind of resin: 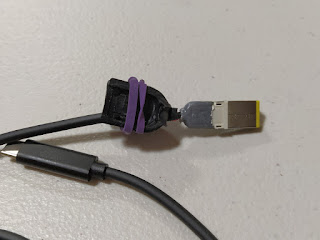 After trying to use the pen knife to scrape away the resin, I decided it would be faster to use the soldering iron to melt away the resin instead. I focused on the area near the black wire to reveal the resistor: 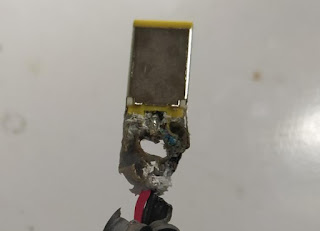 It helps to have a piece of wet cloth nearby to clean away the melted resin on the tip of the soldering iron. Also a pair of sharp nose cutter is also invaluable in helping to clean up the residual resin as much as possible.
Here's the connector with the resistor removed: 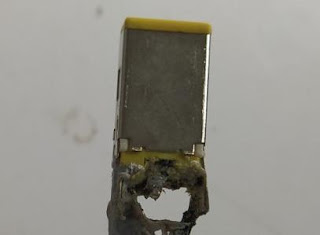 You basically want to clear away enough resin so that there is adequate surface to solder on the new resistor.
Here's the removed resistor: 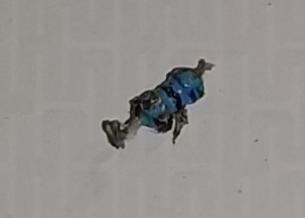 Here's the connector with the new resistor (270Ω) soldered. 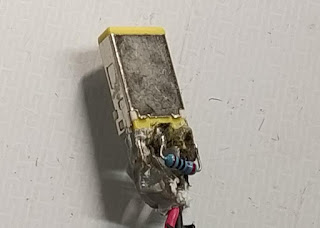 At this point, I tested the connector with the 60W battery, and it worked flawlessly! I left it running for 10 minutes, charging the laptop while I maxed out the CPU and screen brightness, and it didn't miss a beat.
Now to wrap things up...
With the connector sitting in one half of the rubber enclosure, I added copious amount of hot glue into the crevices to give it strength. Then I folded in the other half of the enclosure, and secured the two halves together with some electrical tape. 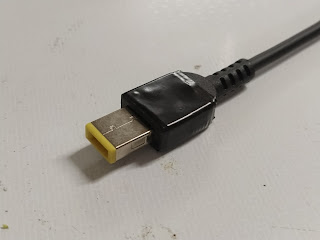 I think hot-shrink tubing would have been a better choice, but since I didn't have the equipment for that, electrical tape would have to do.
That's it! Now I can charge my T450s with a portable battery.