I recently tried printing and installing the Drivinator, which is a direct drive mod for the Creality Ender 3. It makes use of all existing parts, so there is nothing extra to purchase (the stepper motor wire needs to be lengthened, which is easy done by a little splicing; an even easier route is to purchase an extension cable online). It is also compatible with the FreeABL bed levelling mod. 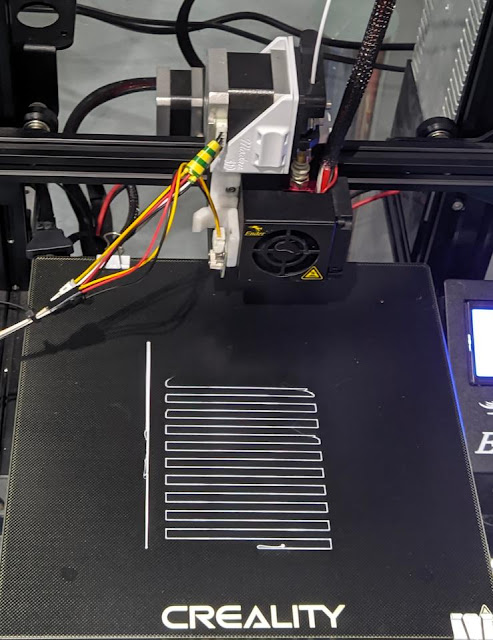 Besides FreeABL, this is easily the best mod I have installed for the Ender 3, well worth the 1 hour or so I spent on the job. This was the YouTube video which helped me install the mod:
Where before the extruder would sometimes skip and grind under the Bowden tube setup, the extrusion after the upgrade is just smooth as butter. The extra weight on the print head also doesn't seem to affect print quality or speed.
With the enhanced extrusion, I was now able to crank up the print speed. But at higher print speeds, I discovered sharp corners were showing signs of over extrusion, so I needed to find a way to enable "Linear Advance" in the Marlin firmware to solve this problem.
As I detailed in my previous post, I have already crammed in normal LCD menu, auto bed levelling and S-curve acceleration into the miserly 128KB afforded by the original Sanguino board on my Ender 3. Surely this time I would finally need to upgrade the board?
Incredibly, I found I was able to squeeze in Linear Advance with the following config changes:
So basically by disabling volumetrics, which I didn't use anyway, I was able to enable Linear Advance along with all the other goodies I have enabled previously.
The next thing that needed to be done is to calibrate the K-factor using the calibration test pattern generator. Once that was done, I was able to crank up the print speed massively with very little degradation in print quality. The print time was roughly reduced by 40% over the Bowden tube setup using all stock parts, which is pretty impressive if you ask me!
Recent update:
Shortly after the above mod, I updated to Marlin 2.0.7.2, and wanted to include the Z Probe Offset Wizard.  This is enabled by setting in Configuration_adv.h:
Unfortunately, this addition made the compiled result go above the 128KB limit, so I had to use the final weapon, which is to add the following compiler directive:
to platformio.ini under the [melzi_optimized] section.
After this was done, the result was able to fit into 128KB:
and the new wizard can be found under Configuration > Advanced Settings > Probe Offsets > Z Probe Wizard.