These are the connections required: 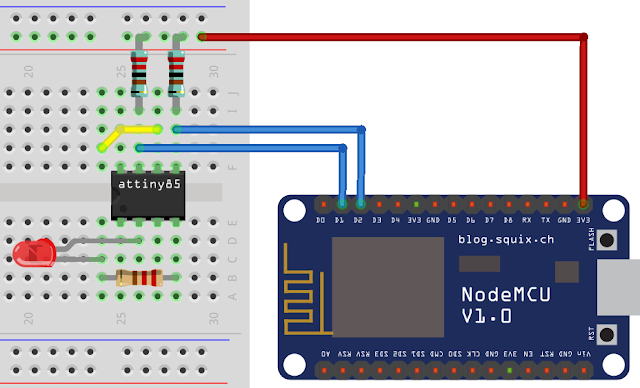 D1 and D2 are both pulled up to 3V3 on the ESP-12E with 10K resistors. The ESP-12E and the ATtiny85 are connected via different USB cables (ATtiny85 via the Arduino Uno) to the same USB hub.


The expected output from the ESP-12E is:

and so on, all with the LED blinking on the ATtiny85 at roughly 1Hz.

There are very few sources I could find on the Internet on interfacing ESP-12E (or ESP8266) with ATtiny via I2C, so let this post be a confirmation that it can be done quite easily.

I took note of Liebman's comment below and added this line:

Works a treat, and I was able to run ATtiny85 at 1MHz without impacting the reliability of the I2C communication with ESP-12E.

The other thing I realized was that running the ATtiny85 at 1MHz is unreliable for I2C communication. After an indeterminate amount of time, it will get stuck. The author himself says that it has never been tested for 1MHz. So to get it working reliably, I had to run the ATtiny85 at 8MHz. This can be done by setting the internal clock to 8MHz from the "Tools" menu: 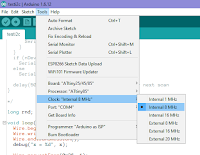 then burning the correct fuses by selecting "Burn Bootloader": 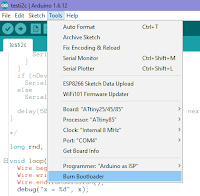 After I did that, the communication has been verified to go on reliably for hours without any hiccup.

However, because of this increase in clock speed, I had to make minor changes to the Timer1 interrupt logic. At 8Mhz, the slowest interrupt rate that can be achieved is 0.5Hz (twice a second). As such, I had to add a counter to the ISR to set timer1 to true every second time the ISR is called.