February 16, 2017
I previously started a project to hack an analog clock to sync with NTP. I call the project ESPCLOCK, because it uses the ESP8266 chip (or more specifically, the ESP-12E development board for the ESP8266) to integrate with the analog clock.

From a usability viewpoint, I like the fact that there is no need to mess with timezones during setup. Basically when setting up the WiFi, the setup page grabs the timezone from your browser automatically. So setup is as simple as entering the WiFi credentials, and the clock will start keeping accurate time and handle daylight saving automagically.

However, in its current state, there are two issues with the clock:

1. The battery life is awful. Connected to a 2400mAh USB battery pack, it can only last for about 27 hours. A typical analog wall clock will run for at least a year on a single AA battery.

I have been thinking about tackling both problems in version 2 of the ESPCLOCK. While waiting for the parts to arrive, I am going to document the initial design I have in mind.

Instead of using only the ESP8266, which is rather power hungry, I am thinking of delegating the clock module to the ATtiny85. This is a diminutive chip that has a normal power consumption of 2.5mA and a sleep mode consumption of only 0.5µA. It is also extremely low cost, priced at slightly over $1 if purchased individually.

The idea is to have the ATtiny85 drive the hands of the clock, as well as communicate with the ESP-12 via I2C. This can be achieved via the TinyWire library. It will only need to respond to 3 commands from the ESP-12:
The ATtiny85 will effectively act as the "brain" of the clock and automatically catches up with NTP time if necessary. Given its power consumption parameters, it will theoretically last for about 200 days on a 2400mAh battery (assuming 200ms of uptime, and 800ms of sleep time per 1s cycle).

To deal with the EEPROM issue, a 0.47F capacitor will be connected in parallel to the power supply. The ATtiny85 will constantly monitor the voltage of its power supply. When power loss occurs and voltage drops below a certain level (say 3V), the capacitor will provide the ATtiny85 with enough residual power to write the current clock time to the EEPROM. That way, it can keep track of the current clock time accurately in the event of a power loss, without maxing out the write cycle budget of its EEPROM. 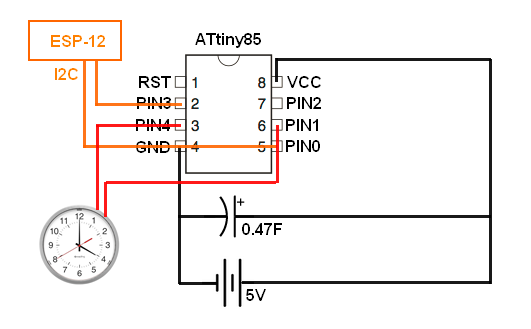 The ESP8266 will sleep most of the time, wake up every 30 minutes (probably make this configurable), get the current NTP time (and convert to local time), send it to the ATtiny85 via I2C, then sleep again.

I have ordered another ESP8266 development board, the Wemos D1 Mini, because it seems to have better unmodified deep sleep characteristics (low current draw of 170µA during deep sleep) compared to the ESP-12E. Assuming an average current draw of 70mA over a 10s active uptime (this is just a wild estimate; I could be totally off the ballpark here), it should theoretically be able to last 180 days on a 2400mAh battery.

Putting the two results together, the entire concoction should last about 95 days on a 2400mAh battery. Put it another way, a 10,000mAh battery should be able to drive the clock for a year on a full charge. Given the low prices of USB battery packs, or even a pack of 4 x 2500mAh NiMH rechargeable batteries, an Internet-connected analog clock that runs for a year on batteries alone seems less a pipe dream!