Following on the success of the test circuit, I added a status LED and a pushbutton to the breadboard.

A summary of the connections:

Note: I configured ATtiny85 to run at 1MHz for additional power saving. Correspondingly, in tiny_IRremoteInt.h, I had to change #define SYSCLOCK from 8000000 to 1000000.

Some highlights of the code:

I powered the circuit using 3xAA NiMH rechargeable batteries. Since the operating voltage of the ATtiny85 is 2.7V - 5.5V, 2xAA alkaline batteries will also work. But with 3xAA, both rechargeables and alkalines can be used, so I went with that.

At 2000mAH per AA NiMH battery, this works out to 363 hours of continous operation. If the unit is run for 2 x 80 minutes every day, the battery would still last for at least 3 months, which is good enough for me. Plus I much prefer to work with AA rechargeables than C-size batteries which the original virtual wall requires.

I soldered the components down onto a prototype board, and here's what I came up with: 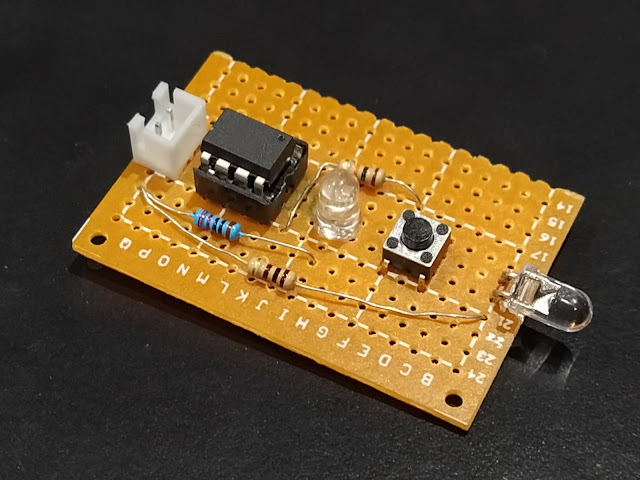 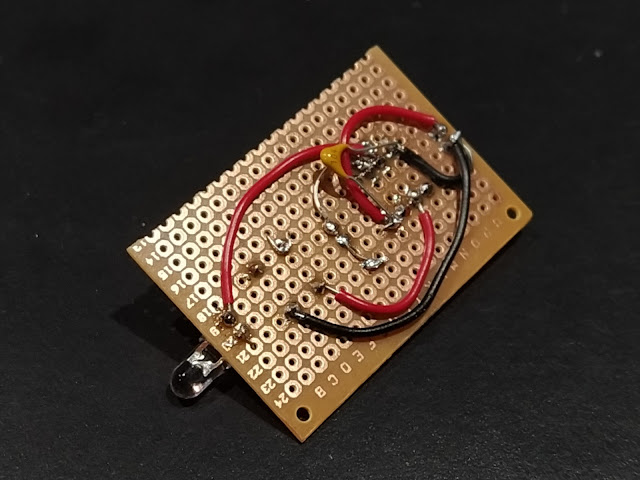 The IR LED is the one jutting out horizontally in front. The white 2-pin JST female connector is for interfacing with the battery holder.

A 0.1uF ceramic capacitor is added between the VCC and GND pins of the ATtiny85 for decoupling purpose.

In the next step, I will 3D print a suitable enclosure for the virtual wall.